After seeing pfSense working more than half year flawlessly on Alix, recently I’ve test it as virtual machine.

To avoid some compatibility issues a “Legacy Network Adapters” must be used. 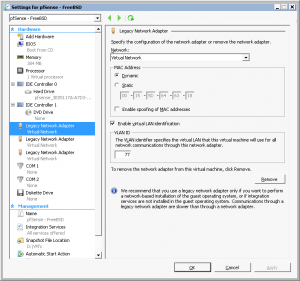 For my surprise even with that trick, there was no network connectivity. The work around for this problem is explained in this thread: Pfsense 2.0-BETA4 in Hyper-V: Throughput not as expected

Just check before that the names of your interfaces, mine were de0,1.

For now it is stable, no issues, with very basic configuration. On the forums there are topics about possible problems with VLANs, but I didn’t need this functionality.

After digging around for open ports I have found TCP port 445 open on one of my machines. For what this port is used? The answer was here:
What’s TCP port 445 used for in Windows 2000/XP?

Then found this article:
How can I configure TCP/IP networking while NetBIOS is disabled in Windows 2000/XP/2003?

If you are interested in the topic references are very good source of information.

I was trying to test System Center Essentials 2007 SP1 Evaluation Copy. But did not happened to have virtual server or hyper v. So I decide to import it in VMWare Workstation. The following error appeared when I try to import it “source format was not understood”.
After googeling it, the only relative result was : Converting Microsoft’s Virtual Server Machine to VMWare

“Today I downloaded a SharePoint virtual machine from Microsoft. When I tried to import it to VMWare I got an error that said “source format was not understood”. I google the error and didn’t come with a solution to my problem. So I did the next logical thing, I open the VMC file for the Virtual Server and poked around. I found that the attribute didn’t have any value. I changed that value to the physical location of the machine. In my case it was F:\Virtual Machines\MOSS Demo\WIN03_MOSS.vhd

When I started the import from VMWare, it worked.”

Close, but did not do the job for me. After reading the .vmc file.

Obviously this portion was the problematic one: 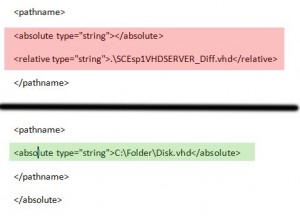 First I fixed the first absolute with new path, but still it was not working. Then think about it VMWare have completely different way of managing disk, to the relative and the differencing did not seem to fit in the picture. Removing the “relative type=”string”.\SCEsp1VHDSERVER_Diff.vhd” do the trick.

Hope this will be fixed later on.